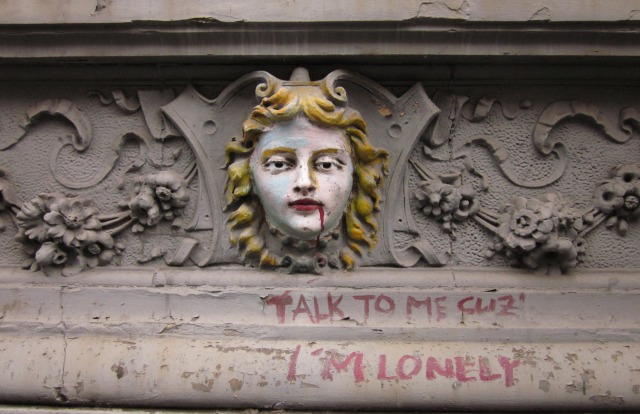 I was recently recovering from surgery, a position in life that necessitated frequent perambulations around my neighbourhood. I don’t want to discuss the surgery, and I am absolutely fine now, thank you! With nothing on my mind except trying to keep my stitches in place so that my insides would not fall out, I was free to observe everything and everyone around me in great detail. As much of my recovery took place during the cold months of winter, I frequently found myself outside wrapped up like a sumo wrestler and doing my best to stay upright against the onslaught of ice and snow. Brim full of warmness, there I would be, walking along in my locality, delighted with new discoveries after nearly twenty years in the place. In my delight I might venture to say hello to a passerby. On this particularly cold afternoon I was out and about, thrilled with myself that I was fully intact, not too sore, fed, watered, and about to do my mileage for the day.  Darkness had not yet fallen, and there was a lovely wintery smell in the air –  hearth fires, warm dinners, combined with wet leaves sort of smell. Along the road I observed a figure advancing before me, and I thought to myself to make sure to say hello. To be friendly. To smile. After all, a smile goes a long way. I had been alone all day, and I wanted someone to smile back at me. It took a few minutes for the person to pull up alongside me, but just beforehand I observed a large pair of earphones under her woolly hat. ‘Hello’ I said to no avail. She didn’t even look at me although she was literally a footstep away. She was clearly hell bent on doing her own miles for the day. But I was surprised at her deliberate solitude, eyes straight forward, not even a gaze to right or left. I may as well have been invisible. Maybe she was thinking, or sad, or worried, and didn’t want to engage with the world. So, I thought to myself, I would do a little experiment, and while walking my local park I’d say hello to whoever passed me, because we are a friendly nation. We like to talk to eachother, to reachout. The following day I walked the boundaries of the park opposite my house. It was a little earlier in the day; the winter sun was casting playful rays through the trees and turning their trunks a strange shade of purple in the shade and shadow. I said hello to eight adults that afternoon, all of whom were wearing earphones, and none of whom even made eye contact. ‘No wonder’, I thought to myself ‘that the world is such a lonely place. Earphones have taken the place of conversation’ for some anyway. I wondered whether all of those people to whom I had said hello were thinking, or sad, or worried, and didn’t want to engage with the world. Wouldn’t a brief ‘hello’, or even an eye smile with a stranger have helped?

The photograph above was taken by myself on St Mark’s Place in New York City in the summer of 2013.